Dead Babies in the Heartland 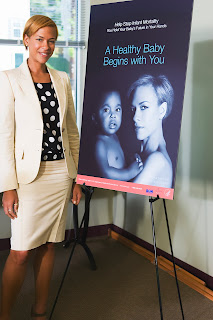 In the past month, since I've last posted, I've attended a breastfeeding conference taught by Dawn Kersula, and an ICAN conference, featuring Poppy Daniels, Geradine Simkins, Pam England, and Henci Goer, among others. I have presented in Wichita at the Kansas Govenor's Public Health Conference on the subject of Lactation in the African-American Community and at the Doulas of Kansas City meeting on the topic of Birth Practices Among African-American Mothers. In the past month I have sat on several committe and board meetings discussing materal infant health, including the Kansas City Health Commission, the Women's, Infant's and Children's Health Committee, Kansas City Midwives meeting, Missouri Midwives Association Meeting, the Kansas Breastfeeding Committee, the Fetal Infant Mortality Review Board, and most recently, the Mother and Child Health Coalition, which yesterday, brought Tonya Lee Lewis (wife of Spike Lee, seen in photo) to town to talk about infant mortality in the African-American community. All this talk of Black folks, babies, breastfeeding, birth, and death has got me thinking...

The problems that plague my community are so endemic, so deeply entrenched, that I've lost faith in the current system of health/maternity care to fix them. Not many seem to be terribly bothered that the infant mortality rate of the African-American community is twice to three times of that of Caucasian Americans (something I discovered three years ago while researching my master's research project). There are those who see the problem, but feel powerless to know what to do about it. I sit on the local FIMR board with the obstetricians who run the county hospital that sees the bulk of city women on Medicaid, and while they are knowledgeable and wise, they are also weary worn from years in the trenches and too busy on the front lines of care to innovate (or better yet, prevent) problems from occurring. When I worked as a labor and delivery nurse in this same facility several years ago, even I became numb to the number of dead babies I saw on a routine basis.

Infant mortality is the number of infant deaths per 1,000 live births prior to the first birthday. The major causes according to the Center for Disease Control are congenital malformations, prematurity and low birth weight, SIDS, and complications of pregnancy. March of Dimes has gotten involved on two of these: prematurity and low birth weight, because these are so often preventable and iatrogenic in nature (meaning hospital or provider caused). Inductions and non-medical cesareans are frequent causes of prematurity and low birth weight. These NICU-bound babies don't have to be. Healthcare providers and maternity care advocates need to take a much stronger stance against inductions and non-medical cesareans. Breastfeeding is also tied to mortality, when NICU babies, already compromised, don't get the immunological protection of their mother's milk. The CDC listed several NICU complications that lead to mortality (sepsis, necrotizing enterocolitis, respiratory distress syndrome) which might be positively impacted by the introduction of mother's milk. African-American babies die at greater rates because Black women are the least likely to breastfeed and the most likely to have the risky interventions (inductions and cesareans) that lead to infant morbidity and demise. Black women suffer more pregnancy complications, are more likely to have poorer health in general as well as preexisting conditions that complicate pregnancy. Black infants are more likely to die of SIDS.

Kansas fares even worse, boasting the highest infant mortality rate for Black infants in the nation. While the national average hovers between 6-7 deaths per 1,000 births (for all babies) and about 12 deaths per 1,000 for African-American babies, in Kansas the figure is around 7-8 for the state and a little over 19 (!) for African-American infants. Why is Kansas (my current state of residence) so bad? No one seems to know. However I happen to know that in Wyandotte County, the poorest county in this southeast part of Kansas, hospitals have closed and access to prenatal care is limited to one or two hospitals and no community clinics offer prenatal care. Public transportation is an issue in this county and the economic forcast is bleak at best. So the zip codes with the fewest resources have the poorest outcomes. I'm sure this scenario is repeated throughout the urban and rural counties across the state. Infant mortality in Kansas is so bad, that two years ago, the govenor convened the Blue Ribbon Panel on Infant Mortality. This group has lit a fire under this issue, and has recently published a list of recommendations. These recommendations led to the formation of the Kansas Prematurity Panel, which I look forward to being a part of in the near future.

One of my nursing students asked me yesterday, how many committees, boards, and organizations I actually belong to. I told her I've never done an exact count, but there are a lot. I attend these meetings to learn, to discover answers, to find allies, to engage my community. Even though there are many professional organizations to which I claim membership, there is one more that I look forward to joining. I believe these folks understand the nature of the problem in much the same way I do. The International Center for Traditional Childbearing is devoted to a cultural approach to increasing lactation, and decreasing infant mortality. A local Missouri chapter is starting up later this month. Finally, a community-centric approach to the problem. I'm not belittling the wonderful efforts of so many outside of my community- thank God they have taken notice of the problem and have enough concern to act. I'm putting the heat onto myself and other African-American professionals and maternity care advocates to look for home grown solutions within our own communities. Almost daily I write out my ideas and vision for what good maternal infant health looks like in my community. Last night Idreamed about preconception care and how to create a model that was culture-specific. I'm still trying to find my place in all this. My journey toward midwifery is still in its infancy. There is so much work to be done.

This is a clarion call to all others who would join me, but especially to those of my own community who want to become part of a solution. We need radically new ideas, radical new models of care that are woman-centered and culture specific. To this end, a travel phase of my journey will begin. Next month, I'll return to Haiti to spend time with an obstetrician in private practice. Dr. Delson Merisier is making an earnest attempt to deliver quality maternity care in the face of terrible medical deprivation. I met him on my last trip to Haiti last Fall, and was impressed by his tireless efforts to care for the women in his community. I will be living with him and his wife and three children in his maternity clinic (their home was destroyed in the earthquake) for a week. On the return trip, I will stop in Florida to visit Jennie Joseph. She is the British midwife who pioneered the JJ Way prenatal care model to improve prematurity and low birth rates (the two leading causes of infant mortality). I am looking for other culturally specific pioneering models to learn from. I intend to take what I learn and put the best parts of it to work to improve maternal infant health in my own community.
Posted by LaborPayne at 4:39 AM

If there is not a Birthing Project in your area, perhaps you can start one. The founder cut her community's infant mortality rate in half.

I have heard of this program. I will check it out. Thanks.


Thank you very much. I agree with your article, this really helped me. I appreciate your help. Thanks a lot. Good website.