Just recieved permission from the powers that be, that taking nursing students to Haiti has been approved! This will be such a great experience for them. Now the fundraising can begin. It's a little too soon to recruit students, that will begin next month. For now, I'm seeking foundations who would be willing to let me apply for grant monies to cover student expenses, and any other simple, yet effective fundraising ideas. The trip is set for the end of September. Now to make it happen...
Posted by LaborPayne at 6:26 AM No comments:

As I gave my Haiti presentation to the local doula group on Monday, I tried to explain the beauty of birth as I saw it manifested in the Haitian women as they birthed their babies. What struck me was a story I have not yet shared about my experience in Haiti on this blog. The story of how 'some things never change.' I was at the hospital on day 4 with one of the American midwives. She was quite a lively animated person, and I enjoyed both talking with her and watching her work. I could tell she loved being a midwife- she was really into birth. She really showed me what was possible and under her tutelage I saw the most remarkable things. Well we were in the thick of laboring a woman. She was dilated to 9, and we had her in the small delivery room along with her aunt and cousin to help her (her cousin spoke English so we used her as our interpreter). She was all over the floor laboring in the most amazing positions, really working hard and effectively bringing her baby down. I was utterly amazed by this labor and how well this woman was working. Then he came. The Haitian obstetrician chose this time to make his rounds. He spoke English and was young and handsome (looked a hellava lot like Taye Diggs). He swooped down on the unit we had been running all day and started to take over. The midwife was miffed to say the least. Prior to his arrival she had given me this sweet little speech about how we were guests here in Haiti and should not behave like colonialists and take over everything. However when that Haitian OB came in and told the family members to leave and our patient to get off the floor and up on the delivery table, I could see the mama bear come out of this tiny little woman. She got right up in the doctors face and said, "Is this my patient or your patient?" She wanted to know who was going to do the delivery. They toussled for a while, there was some give and take. My midwife shook her finger in his face, 'don't you cut her' (referring to the routine episiotomy she thought her patient might get from him.) We slowly allowed the aunt and cousin back in. However we also got the patient on the table and put in an IV at the doctor's request. The doctor had brought along a little patient he intended to do a cesarean on, and I prepped her for surgery as well. While he was over in the main hospital building preparing his OR, our patient delivered, with her female relatives at her bedside coaxing her on. It was a fantastic birth, that almost didn't happen that way. It was because the midwife did the very thing she said she would not (get all colonialist on his ass) in an effort to protect her patient. How many times do we as midwives, doulas, nurses have to put our bodies between the patient and the physician to protect birth and keep it sacrosanct? I could feel the burden of this midwife. I too wanted him to get the hell out of our little delivery cocoon and leave us be. Technically these were his patients. Technically his western-infused ideas about how to conduct safe childbirth came from his American-influenced education. He was puzzled by why and how we were allowing sacred space for this woman to birth in her own body in her own way. He only knew his way, the way he had been taught, the way that didn't allow for individualities of person or cultures. (By the way, this application of western medical values into third world realities leads to some pretty brutal births- think pit induction without epidurals, or cesarean births without post op pain meds.) I understand that a lot of physicians Haitian, American, and otherwise think this mechanization of birth is the key to good outcomes. I understand it, I just don't happen to agree. Watching my little midwife go toe to toe with that physician reminded me that some things just never change- without a revolution. And in the midst of revolution you may find yourself saying and doing things you thought you never would.
Posted by LaborPayne at 5:02 AM No comments:

Photos from the Mother's Day Luncheon 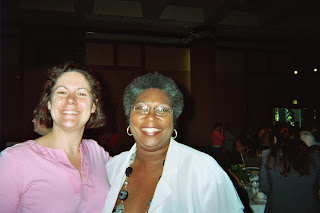 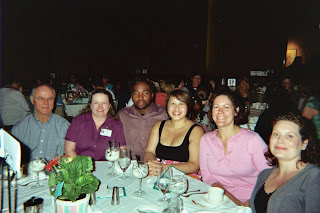 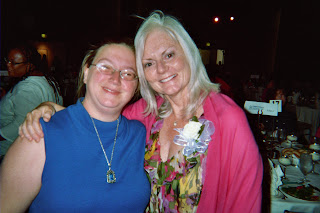 Here are photos from the luncheon yesterday. Midwife Cathy (white hair, pink shirt) was honored as one of the 25 Shining Stars (always been a star in my book!) next to Rachel (another midwife) determined to open the next birth center here in town. There's a shot of my table and all my guests. Dr. Palmer a dentist who has done some kick ass research on the relationship between breastfeeding and good dental health (brianpalmerdds.com), Pat, my partner in crime who teaches pediatric nursing, Airick West, president of the KCMO school board, Pakou, local birth activist writing a book of birth stories of women of color, Liz, mom extraordinaire and fellow nursing educator, Mariah (my mini-me) all around birth and breastfeeding advocate and professional volunteer. The final photo is of Liz and I. Another nicely done luncheon, honoring folks who deserve the recognition.
Posted by LaborPayne at 2:37 PM No comments:

I will be giving another travelogue on my trip to Haiti next Monday, May 10th at the Doulas of Kansas City meeting, at 1pm. They meet at Cornerstone Community Church at 74th and Metcalf. Everyone is welcome. I'm actually more busy planning the next trip. I'm taking a couple of collegues and some nursing students to Haiti in September. The honor society would like to collect items for me to take based on the presentation I gave at school. They want to have a 'pad drive'. Now I am thrilled that they want to collect sanitary napkins, however my problem is that ecologically, it may not be a good idea. I'm going to research companies that sale cloth pads and see if we can do some fundraisers to purchase cloth ones instead. I may also steer them toward the purchase of cloth diapers. I'm busy trying to set up birth centers, hospitals and clinics for us to visit. Its fun to watch a new trip take shape. And... I'm also open to doing more travelogues!
Posted by LaborPayne at 5:23 AM No comments:

I used to hear the term 'late preterm' and wonder, what are they talking about? Now I know all too well. Now that I've had a week to ruminate about the speaker last Saturday at the birth conference (not Ina Mae, the neonatologist, or was she a perinatologist, I can't recall). Anyway, she gave the most compelling presentation on late pretermers, that is babies born between 34 and 37 weeks pregnancy. Almost all the students that come into my classroom thinks that 37 weeks is full term. Some think 36 weeks is. How can this be? Easy, when our casual practice of inducing every woman anytime after her 36th week of pregnancy for every reason imaginable has made preterm birth commonplace. Even the March of Dimes is finally going after physicians for it's massive social induction rates. It's absolutely startling that folks are beginning to forget that babies need 38-42 weeks to gestate. I quiz every class of students about how long a normal pregnancy should be- and I always hear 36 or 37 weeks. These babies are actually premature, and belong in a class known as 'late preterm.' The speaker spoke compellingly about how these babies may be endangered by the fact that they appear physically mature, and as a result monitoring things like respiratory status, thermoregulation, serum glucose and other measures of neonatal wellbeing may not be as diligent. There is no doubt as to the cause of the spike in preterm deliveries. The culprit is inductions. Women have become intolerant of their pregnancies. Physicians can't resist the ability to jumpstart labors for the least provocation, sometimes for no provocation at all! All this belies the fact that babies still need the same amout of gestation time that they always have. Having babies be born prematurely for any reason other than medical imperative should be considered unethical. Yet it is so common, the practice of induction has slowly but surely redefined the public perception of what constitutes, 'full term pregnancy.' Many women now consider the presence of a NICU an important consideration in selecting a birthing facility. Well if they submit to induction technologies used prior to the start of true labor, they are probably going to need one.
Posted by LaborPayne at 7:08 AM 1 comment: