Kickolito- The Hope of Haiti 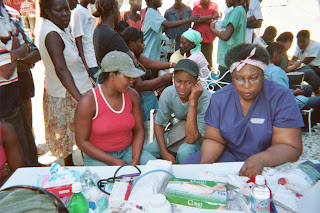 My interpreter, KiKi, is a 21 year old young man, with an earnest face and wise, old eyes. He is seated next to me in this photo with the baseball cap. I fell in love with KiKi. Unlike many of the interpreters (all bright young men from 19-25 years old) who joked and laughed, KiKi was always serious and focused. When we finally got a chance to chat, he told me his father was deceased, and he lived with his mother, and two younger brothers (18 and 14). He also has an older sister, but she lives on her own, so at 21 he is the man of the house. He spoke about the restoration of Haiti. How he wants to be a part of seeing her restored. I asked him what he wanted for himself. He said he is interested in designing energy efficient automobiles. That he plans to attend college here in Haiti. He thanked me for coming to help the people of Haiti. On our last day together, I wanted to take him out to dinner, as a thank you. He refused, stating, "If I come home late, my mother will worry." I thought of him riding home, an hour away in those crowded city tap taps. I asked him if his home was damaged by the quake. He said no. I can't imagine what life is like for him, and yet I feel such an affinity to him. Kiki is Haiti to me. If and when I return to Haiti, it will be partly to know that he is well.
Posted by LaborPayne at 4:30 AM