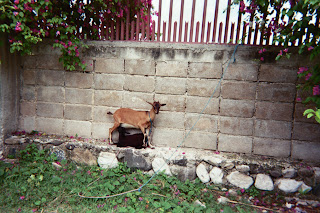 After many mishaps (including a cancelled flight and a 12 hour wait for the next one) I finally arrived in my beloved Ayiti. When I arrived at the airport tired, from a night without sleep (from sitting up in an airport) and being crushed in a small airplane seat for hours, I felt so good to finally touch down. There were my mountains (ever constant!) waiting for me. Dr. Delson and his driver, Francios arrived shortly after I emerged from Toussant L'Ouveture airport into the hot, crowded outdoor waiting area. The hour and a half drive back to Leogone seemed shorter, since I slept through most of it. I thought I might have my old room back again, but Dr. Delson ushered me to my new quarters, a small second floor apartment that was being built the last time I was here. I entered my small neat quarters with an attached bath and saw how hard the Merisiers had worked to secure my comforts. Dr. Delson pointed to a self standing air conditioning unit in the corner of the room. "It doesn't work" he apologized, "not enough electricity to run it." He had purchased two of them and installed the second in his and Mrs. Merisier's bedroom, but without electricity enough to run either. In truth, I was glad. Though the heat was oppressive to some visitors, I handled it well enough. After all, the hot wet heavy air is reminiscent of my midwest home. "Dr. Delson", I assured him, "When I am in Haiti, I will be Haitian."

Upon my arrival, I greeted Madam Merisier and the three children and gave them all gifts. Madam recieved sturdy cooking utensils, the oldest boy of eight I gave a toy airplane, Delshawna, the six year old girl got a purse with a stuffed cat in it, and to four year old Junior, whom everyone affectionately called, Gigi, I presented a pack of tonka trucks. I also handed Monsieur the money for my room and board for the week, which he promptly handed (without counting) to Madam.

On the ride back from the airport, Francios produced a bag of sandwiches. I was hungry, but disappointed to see the bag held a hamburger and fries (the Haitian version of which is far from palatable). I was hoping for some Haitian delicacy. I munched a couple of fries to be polite, and downed a bottle of water instead.

However, after arriving at the clinic (serving as the family temporary home as well), I showered, changed and came down to dinner to a real Haitian meal. Madam Merisier did not dissapoint. She served rice over which was generously poured a rich, succulent bean gravy. This was served alongside a hearty stew of carrots, greens and beef. I can taste it, even as I write. This was the stuff for feeding a weary sojourner. Alongside was served a cherry drink, made from the Merisier's own cherry tree, that was thick and delicious and had the consistancy of a slushy. This theme of consuming what they themselves had grown, or raised and slaughtered was to continue.

After dinner, Monsieur (Dr. Delson) asked if I would like to accompany him on his favorite end of the day activity. The children followed along as we walked a short way up the road to the plot of land where is house once stood. He unlocked and pushed open the gate, and an entire HERD (yes I know chickens come in flocks, but they came at us like a herd!) of chickens came clammoring towards us. Monsier laughed and said, "They know it is time to eat." There must have been about 50 chickens in the yard. A small white chicken even jumped into his arms, not waiting for him to lower the bowl of feed to the ground. Monsier smiled again, "She always does that." I watched as he went patiently about, feeding his chickens and telling me how he had figured out to breed chickens so successfully. He kept the hens with chicks caged at all times, because he found left loose at night, they were killed by 'rats, snakes, and mongooses'. He also discovered that given them medication at certain times of the year kept them from succombing to infectious disease. At night, all the chickens retreated to their pens to be locked in for the night, and the four dogs living on the property, were let loose (as they were penned by day), to discourage theives or mongooses who might try to get at the chickens. There was also a tom and hen turkey among the chickens. Monsier, had hoped for some baby turkeys, but the latest nest had, 'gone bad'. The hen turkey was kept penned so that she would not return to sit on the doomed nest. Monsier grabbed the tom turkey and put him in the pen with the hen, saying, "Now, go to her" betraying some wish that soon there might be a new nest.

Afterwards, we walked to the back of the property to feed the goats. I did not know the property went back so far (the foliage is so heavy) but as we walked, we passed not only the eery tangled metal remains of the Merisier house, but two other houses as well! "Monsier," I asked, whose houses are these?" They belonged to his brother and sister, 'for retirement' as they both live in the United States. I marvelled once again at how much he had lost and yet he remained resolutely upbeat. I was learning more about Dr. Delson in one day on this trip, than I had known the entire week previously.

I began to ask him about his practice. He said he was the only OB in Leogone, but that he had lost much business since the earthquake when the NGOs and missionary clinics came and served the women for free. He said this matter of factly without malice about the loss of income. He said that before the earthquake, he had a pediatrician partner (the clinic was two floors then) and they had planned to practice full service maternity and pediatrics together. After the earthquake he not only lost his newly built two story home (completely built but not yet painted), but his partner went in search of other opportunities elswhere. He told me Leogone has always been his home and that the need is great, and that someone must stay to serve. When I expressed astonishment at all he had lost, he shrugged his shoulders and said, "I am glad to have my life, that and my family's."

After feeding the goats, he showed me the fruit trees on his property, mango and papaya mostly. Then he asked me, "Have you ever heard of breadfruit?" "Yes, I've heard of it, but I've never eaten it." "This is it." He held out a strange roundish spikey green thing, presently pulling it open with his fingers to reveal its pulpy flesh. I picked some up and almost put it to my mouth but the youngest child laughed at me. "Here is the part you eat," Monsier quickly showed me as he held out a round hard pingpong sized seed pulled deep from within the flesh. "Oh, you eat the seeds?" I asked. "When they have been boiled." Then he pulled several breadfruit from the tree and we all retrieved the 10-12 seeds from each one. "These are small ones," he said, "the larger ones can have up to 50 seeds in them." When we had walked back to the clinic, he gave the bowl of breadfruit to his wife to cook. "You will have them for breakfast," he said to me, "then you will be just like a Haitian."

He told me at one point (while I was devouring his wife's cooking), "We are family now" and I believe that we are. At one point he mentioned that he had never done an abortion even though he had been asked to many times. "Why is that?" I asked, thinking it had something to do with the Catholicism of the island. "I just cannot do it," he finally said after trying to explain. I understood, I could not with my own hands either. The conversation turned to brighter things as he told me about how he had lowered the rate of preeclampsia in his community and helped to stem the flow of maternal deaths. "Dr. Delson," I said, "I shall make a study of you." "I want to write about what you do here, and publish it in a medical/nursing journal if I can. "

This morning, I enjoyed a breakfast of fresh bananas, and mangos, papaya juice (again frozen and slushy and delicious, and made from their own papayas), breadfruit and Haitian coffee. Now when I saw the coffee, I did not want to have any because I am not a coffee drinker. Besides, it looked blacker than American coffee which I took to mean it was even more bitter in flavor. I poured a cup to be polite, and much to my delight, the stuff was delicious! Sweet, smooth and more flavorful than I can tell. I drank two cups! The breadfruit, alas, did not fare as well. They had been boiled and peeled, and did indeed did have a flavor reminiscent of bread. The texture was soft and fleshy, but the flavor somewhat stringent and unappealing. I ate several, again to be polite, and chewed them alongside the banana to mask the flavor.

Francois took me back to the airport to retrieve my missing luggage (Monsier's luggage to be precise, it was his medical supplies). That done, I returned to my upper room retreat to nap away the hottest part of the day. The Mercier's had gone for the day to a party in Port au Prince and to return their two older children to boarding school for the week. I look forward to what the rest of the week holds. Monsier said he has four women due anytime, so perhaps that fates shall shine upon me.
Posted by LaborPayne at 3:15 PM

Traveling abroad to offer my health education services AND most importantly to learn traditions, is such a dream of mine. Reading this post made me feel like I was right there with you. What is your purpose there?