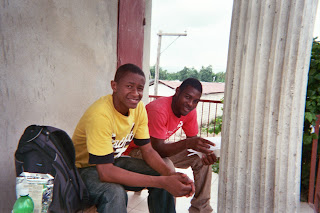 Yesterday, I sat on my balcony entertaining two guests. Kicki and Mose. Kicki was my interpreter during my first trip to Haiti last March, and Mose was my interpreter during the October trip. I introduce them to one another and watch a bond form. Like most interpreters, they are in their early twenties, and hope for a better future. I smile watching them converse in Kreyol. While Mose lives and works here in Leogone, Kicki has made the trip out from Port au Prince to visit with me. I have seen Kicki on every trip, he has been generous, keeping in touch. I fuss over them both, telling them how handsome and how smart they both are. Kicki smiles shyly and tells me he is too 'flat' (he means he is skinny!). Mose says his English is not good. "No", I say, "it is very good!" (It is far better than my Kreyol.) We visit for a long while, and I hear about their families. Kicki plans to start college soon. He has been waiting and saving for four years to go. I am thrilled for him. He is torn between studying engineering and architecture. Kicki has written a book and shares it with Mose. He has written two volumes of a book on French to English translation. I look it over and it is very well done. He spells out the pronounciation of English words from a French linquistic point of view. I've not seen anything like it. I have had trouble learning Kreyol from a book because looking at how a word is spelled, does not tell me how it sounds. Kicki has already corrected me for pronouncing Kreyol words with a Spanish accent. (Spanish is the language I know best after English, and it does get in the way of both my French and Kreyol. When I think of a word I want to say, I have to sift through it's English and Spanish counterparts first in my brain.) Kicki is very bright and I know he will do wonderful things with his life. He will make a very lovely man, inside and out.

The theme of the day must be visiting, because after clinic is completed for the day, I walk down the road and visit at the Heart to Heart clinic. There are six workers at the clinic lodging house, four from the US, one from Dubai, and one from Mexico. I enjoy a nice visit with them. They all plan to go to visit Nicole's orphanage tonight. I cannot go because there is a mother in early labor and I don't wish to miss it.

Madam prepared a thick bean soup with beef and plantain (which taken on the texture and taste of potatoes when cooked this way) for dinner. It is delicious. Gigi has dinner with me, and has four servings- in between making faces at me, and shooting me with his finger gun. I feign a hideous death for his amusement. Gigi is such a little ray of sunshine. He plays all day long in between his parents working in the clinic. He can be seen tossing his teddy bear around the courtyard, or riding is toy motorcyle in the waiting room, or landing a toy airplane on the head of the washerwoman as she tends the laundry. The entire compound is his playroom, and all the adults adore him. His parents especially. His mother rarely scolds him, and he brings a ready smile to his father's face everytime he catches a glimpse of him. Wherever I am, I hear his little four year old voice, singing songs, or calling out for his mother. It won't be the same around the clinic when he joins his brother and sister at bording school next term.

Last night I had a full night's sleep. The laboring mother came last night into the compound, but she was still laboring this morning- along with two others! I woke with a start, thinking I had missed the birth, but when I came down for breakfast, I found her and two others pacing the clinic floor in their nightgowns. Monseiur tells me it will be a busy day. I am glad, since today is my last full day in the clinic. I leave at 5am tomorrow to catch my plane in Port au Prince. I will spend the weekend in Orlando discussing birth centers. I am wistful today, as it is my son, William's birthday. I know the entire family will go to Mi Ranchito tonight for dinner, our family tradition. I'm sad to miss it because the birthday person has to wear a rather large sombrero while the waiters sing to him/her in Spanish! We all laugh at the afflicted one, take pictures with our phones and post them on facebook. What can I say? Its a tradition. I'm also a little sad because William will be the first of our children to leave Kansas City after leaving home. He plans to move to Denver in a couple of weeks. I'm not sure when I'll next share a birthday with him.

As my time here comes to a close, I think of how I have fallen into the flow of life here, and its predictable patterns. The Haitians go to bed early and rise early (as is my custom). I am amazed by the humility and generosity of my hosts. The thick, wet heat has not bothered me much. I enjoy the daily afternoon rain shower, and the siesta it brings in the middle of the day. I have not had a drop of processed food all week. I have lived as a Haitian, without the usual worries of a visiting foreigner. All has been well. Thanks to those who read these posts, and give me an audience for my reflections.
Posted by LaborPayne at 6:39 AM

Thank yo for sharing your experience. Is your trip only for a week? It seemed to fly by as I followed. I would love to do something to contribute to the Dr's clinic...maybe crochet baby hats or something?

Dear MIT,
I'm sure there is a way for you to contribute to Monsieur's work if that is your desire. You can email me at laborpayne@yahoo.com.