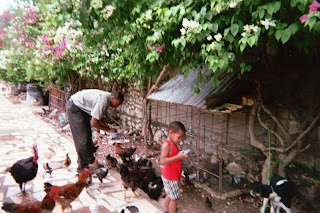 Last night after the Merisiers returned, minus two children, we had a fine dinner of okra and beef neckbone stew (I had never eaten okra before and in truth may never do so again, but it was quite delicious), and rice cooked with tiny beans (the size of cooked millet or bulgar wheat) that I had never seen before, but it too was delicious. More frozen papaya juice rounded out the meal.

After my trip back from Port au Prince, I have decided to alter my appearance. I noted on previous trips here that I could pass for a Haitian except for one thing: my hair. After studying intently, I have noticed no Haitian women wear their hair as I wear mine, in a short Afro. They have processed hair, or if it is natural, it is in braids or cornrows. I also brought along a head wrap, but I noticed that the Haitian women don't wear updo headwraps as African women might, but lowlying wraps that hang low instead of pile high. I also noticed that my Afro was not faring well in the dust. Typically I can wash my hair once or twice a week and it maintains its smooth shininess and shape. Here after one day it was dull, misshappen and wild. I decided I will be Haitian, and wear braids. I had to borrow a comb from Madam, wash my hair about three times to get it clean, than comb it out and braid it. I'm afraid I am no longer very good at braiding since I have long since stopped braiding my girls' hair. I look rather like one of Monsier's chickens, but I also look more Haitian.

Unlike the sleep of the dead I experienced last night, due to my extreme fatigue, this night was fitful. The mosquitoes nearly devored me. I wonder if last night, I was too tired to feel them biting me. The first night I also closed my front door, last night I kept it open to give me more of a breeze- it only gave me more mosquitoes. I also discovered a trail of ants- making their way over to and into my bag of trail mix. I poured it all out on the bed and shook loose the ants, and rebagged it. I have no intention of going all week without a protein snack. The other disturbance to my sleep was the music. It just so happens their is a discoteque directly across the road from my quarters. The Paradise to be exact. It is really just a walled in compound with concrete slabs for floors and thatched rooves overhead (same construction as the local churches) I'm sure the music and revelers were just as loud the night before last, but I did not hear them. Tonight, I was treated to an eclectic variety of Reggae, American and Haitian hiphop, sad French love songs, and Justin Bieber (?). The music was very loud, but that didn't bother nearly as much as the drunken revelers who became more verbose as the evening wore on. Their numbers had grown so great, they spilled out of the Paradise and into the street directly under my windows. Finally it all stopped, and the night sounds of Haiti took over. While human voices and noises rule the day, animal ones rule the night. Monseiur's seemingly nocturnal roosters, begin their calls around 3am- just shortly after Paradise shut down for the night. How did I not hear any of this the night before? Add to the roosters; dogs barking, and cows lowing and you get a more complete picture of my constant auditory assault. Even so, I did manage to get some sleep, but I woke several times to commit mosquito massacre and spray repellant on my beseiged ankles and legs. I dreamed of malaria all night. On a good note, once morning broke, I sat out on my little balcony to listen to the call to prayer coming from the Sri Lankan camp down the road. It was the sweetest sound of the assault of sounds I had heard all night, and made me once again grateful for the gift of sound.

Before breakfast, I went with Monsieur to feed the chickens. As he fed them, he gave me a primer on chicken culture. He alerted me to the sounds a chicken makes when it has laid its eggs. (He then went through the thicket in search of the eggs). When I saw a loose chicken seem as though it might get into a cage with the hen and chicks, I alerted Monseiur. He simply shrugged his shoulders and said, "He won't go in, if he does she will kill him." He pointed out two young roosters sparing with one another, stretching their necks and spacing out their feathers until the look like ostriches. They never fight, only posture and threaten. At this point, I feel that I have learned more about chickens than I have about women, birth, and babies. Yet the lesson is not lost on me.

We show even less sense than Monseiur's chickens. The chickens know that a hen and her chicks must be left undisturbed. But we bombard our new mothers with unreasonable expectations, from knowing 'instinctively' how to care for her infant, to getting her figure back quickly, to returning to work in six weeks ready or not. We allow visitors to converge on an exhausted mother and expect her to entertain them in her dimished state. We tell her that breastfeeding will come 'naturally' and leave her to find her sorority of mothers as best she can. Professionals offer opposing advise to that received from mothers, grandmothers, and aunts, leaving the new mother bewildered and unsure of whom to believe. Other cultures are far more protective of new mothers than we are. Even chickens understand the importance of this.
Posted by LaborPayne at 5:57 AM

Your last statement hit right home for me! While I am pregnant with my 4th child, working as an RN in the hospital, I realize how so many women need a "baby nurse". Im on a quest to start a business. While I dont like that term for me, the purpose speaks to the exact needs you mentioned: education, teaching, and nurturing. Do Haitain women have something like this? Or what do they call them? Id rather provide mama and baby care as a whole you know.

Yes MIT,
They call her 'mama'.